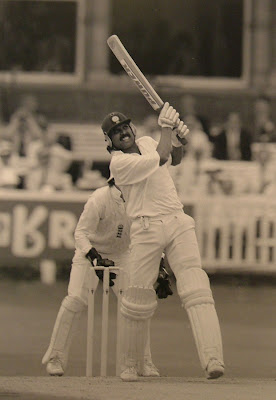 June 18 may not ring a bell but Kapil Dev’s unbeaten 175 surely does! Twenty-five years ago on this same date, the then Indian captain played a stunner that has become the stuff of legend over the years.
Kapil’s masterpiece breathed life into an innings that almost suffered the death-rattle at 17 for five against Zimbabwe at Tunbridge Wells in the Prudential World Cup. In a do-or-die match, Kapil’s knock helped India score 266 for eight in 60 overs and eventually defeat Zimbabwe by 31 runs. The victory eased India’s path to the semifinals and the rest is history
Lets salute such a great cricketer for this wonderful moment today!!!....

source-Hindu
prescribed by broca's area at 11:36

thnx for bringing dis bak in memory
stuff of legends,really!!!

hats off to this man!

@ comfortably numb...yeah man..unfortunately we dont have video of that knock!!..:(

Can still remember the euphoria we all went through on hearing this...thanks to no media coverage of the match. Though the final was mind numbing....and nothing has come close after that...
Hats off to Paaji and his men!

Nice fact for me to learn today. :)

OMG! U r such a cricket fanatic...I didn't even knw that..thanks for the info bro :P

thnx for the info man! Heez a hero of the country!

@ MEGHNA...not a fanatic..just wanted to share it with u people!:)

Man that was his era...one of the best the game has produced and a true gentleman....cheers