yeah finally relieved of this internals burden...can now relax a bit a for few days[skin postings :P]..paper was quite easy and not as usual lengthy!!!....have now planned to watch prison break or The Eye movie[looks scary in trailers!]..have medicine postings coming up so have to start preparing for it seriously[hope so:)]...yesterday while revising digestive system came across a condition called Anorexia nervosa -
"its a psychiatric diagnosis that describes an eating disorder by low body weight and body image distortion with an obsessive fear of gaining weight. Individuals with anorexia are known to commonly control body weight through the means of voluntary starvation, purging, vomiting, excessive exercise, or other weight control measures, such as diet pills.. It primarily affects adolescent females, however approximately 10% of people with the diagnosis are male".

this reminded of Christian bale who for his role in the movie Machinist had done the same thing [had lost more than 60 pounds!]...and usually those in professions where there is a particular social pressure to be thin (such as models) are much more likely to develop anorexia during the course of their career...dont u think they need a psychiatric evaluation???... 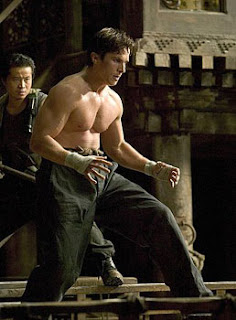 he in the machinist 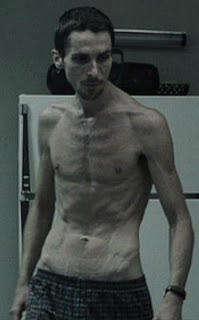 Well, I wouldn't put a diagnosis of anorexia - it's a bit more complicated... There are many cases of actors that gain/lose weight for movie characters - giving a very bad example indeed.
By the way, check out his body before the machinist in the movie American Psico. You will be even more impressed.

In the long run Bale will have problems because he reduced weight beyond limit .. i saw this on some documentry ... Even Tom Hanks in Cast away looks scary ...

@ grey..they will have many hormonal problems!!